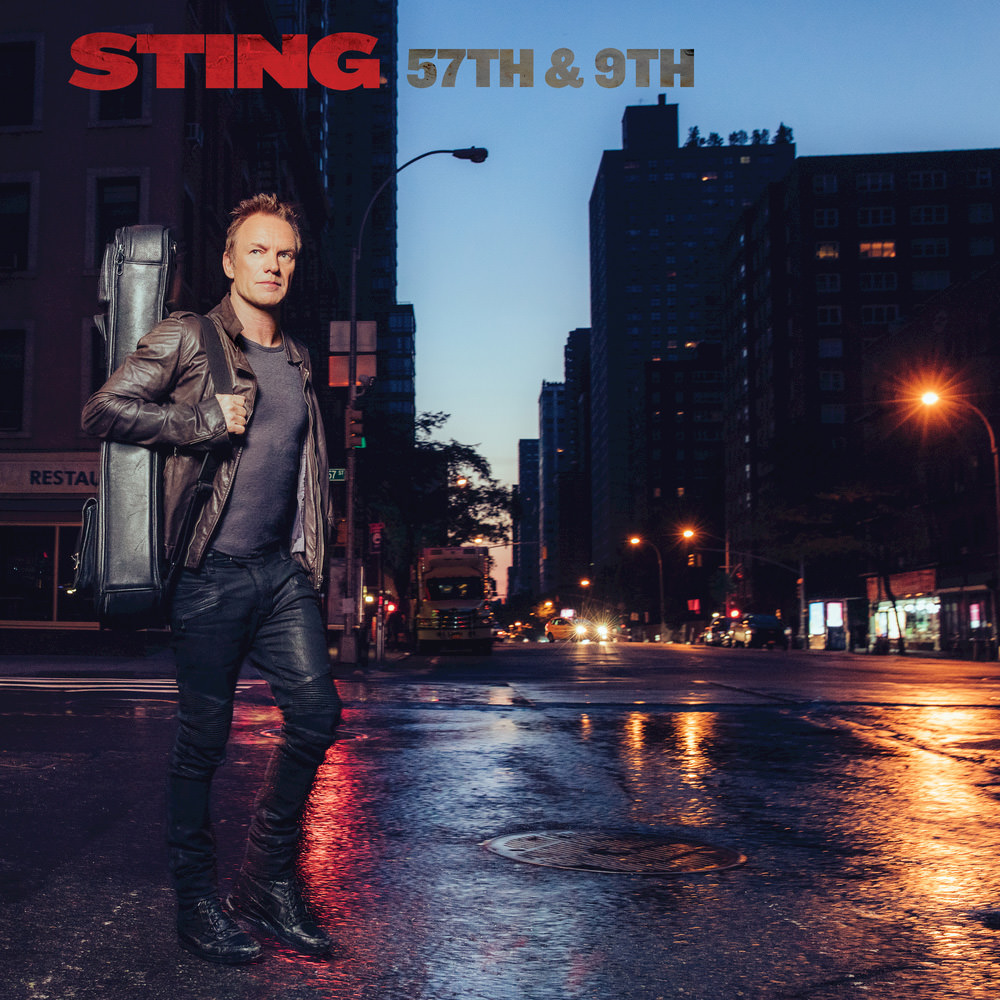 "Sting strips back with his hard-hitting new single, I Can't Stop Thinking About You, a pummel of raw electric guitars, rapid-fire snare rolls and simple vocal hooks ..."
- Rolling Stone

"... a core of guitar, bass and drums that unmistakably recalls the Police. The playing is nimble and articulate, bursting with intricate virtuosity and informed by jazz, Celtic music and waltzes, as well as by rock. Sting sings about crumbling romance, climate change, refugees on the move and what it feels like to read rock stars’ obituaries."
- The New York Times

Sting's return to rock is named for an intersection in Manhattan on his route each day walking to the Hell’s Kitchen studio where this album was recorded. Representing a wide range of Sting’s musical and songwriting styles, 57th & 9th came together impulsively and very spontaneously, with sessions completed in just a few weeks. Sting is joined by his longtime guitarist Dominic Miller and drummer Vinnie Colaiuta, as well as drummer Josh Freese (Nine Inch Nails, Guns N' Roses) and guitarist Lyle Workman. The bassist notes that if there’s a theme in the lyrics, it’s the idea of travel and motion, most apparent on the autobiographical Heading South On The Great North Road and on Inshallah, an account of the global refugee crisis written from a humanitarian point of view. This deluxe edition includes three bonus tracks.

"It’s about searching and travelling, the road, that pull of the unknown. On this album, we ended up with something that’s energetic and noisy, but also thoughtful."
- Sting

Producer: Martin Kierszenbaum
Producer notes from Martin Kierszenbaum:
"We quickly established a daily working routine. Sting would walk several blocks to the studio every day and we'd start recording as soon as he came in. We wanted to register the immediacy of the songs and performances. We didn't belabour the number of takes nor did we need to choosing, instead, to harness Sting's and the players' consummate musicianship and initial musical instincts. In this extemporaneous way, we felt that we were able to retain the edge and excitement of Sting's newly-birthed songs as well as reflect the vibrancy of the New York City environment (which Sting acknowledged in the album's title "57th & 9th.") We deliberately kept arrangements to "rock combo" specs - vocals, bass, guitars and drums at the forefront with organ to support. We didn't use a click track or metronome on any of the tracks which enabled the expressive use of rubato. By combining this with the dynamics in the performances, we endeavoured to achieve a sense of intimacy and immediacy."

Recording engineer notes from Tony Lake:
"The performances on this album were recorded as they materialized and in as few takes as possible in order to capture the energy and urgency of the music. We used mostly classic microphones and pre's focusing on the specific textures and timbres of mostly electric and acoustic sounds as well as the unique articulation of the accomplished musicians. Again, we leaned on Sting's and the player's exceptional musicianship by recording everything 'wild' and not tethered to a click.

Mastering engineer notes:
"Were any special Instruments or recording equipment used in this recorded to achieve a specific sound?"