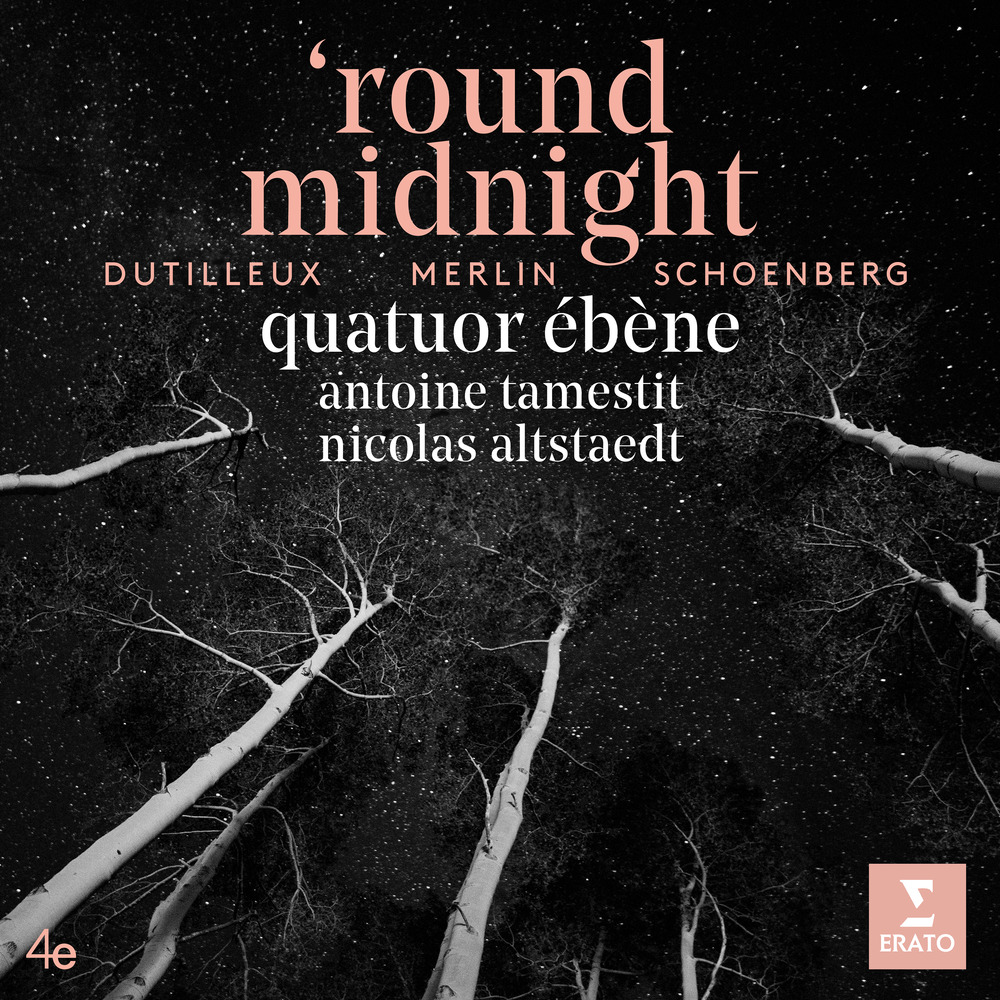 Available in MQA and 96 kHz / 24-bit AIFF, FLAC high resolution audio formats
The members of Quatuor Ébène went round the world with the complete Beethoven quartets, now they go ‘Round Midnight. This album offers a creatively conceived programme, bringing together major figures from different streams of 20th music: Arnold Schönberg, Henri Dutilleux and four masters of jazz and popular idioms – Thelonius Monk, Cole Porter, Henry Mancini and Victor Young. The three works in question, all nocturnally-themed, are: Schönberg’s passionate late-Romantic sextet Verklärte Nacht (Transfigured Night), composed in 1899, for which the quartet is joined by viola-player Antoine Tamestit and cellist Nicolas Altstaedt; Dutilleux’s glistening quartet Ainsi la nuit, first heard in 1978 and comprising seven brief movements, and Night bridge, a ‘nocturnal poem for string sextet’ composed by the Ébène’s cellist Raphaël Merlin. It muses on Monk’s jazz standard ‘Round Midnight, dating from around 1940, on Mancini’s ‘Moon River; made famous by the 1961 film Breakfast at Tiffany’s, on Porter’s urbane and haunting ‘Night and Day’, originally a hit in 1932, and on ‘Stella by Starlight’ originally composed by Victor Young for the 1944 film The Uninvited. Quatuor Ébène’s capacities for crossing genres have already been proven with such albums as Eternal Stories, Fiction and Brazil. As the Pittsburgh Post-Gazette wrote after a 2018 concert which set Thelonious Monk and Miles Davis beside Haydn and Fauré: “… This quartet knows and loves its jazz. The hits rolled into one another smoothly, with cellist Raphaël Merlin acting as emcee … A cello is not a string bass, but Mr Merlin capitalized on the nimbleness of his instrument, conjuring a new feeling to some old favorites. The same can be said of the other members (Pierre Colombet and Gabriel Le Magadure, violins; Marie Chilemme, viola) — it wasn’t a pure reproduction of ‘‘Round Midnight’ or [Wayne Shorter’s] ‘Footprints’, rather, a highly trained string quartet’s impression of the songs ... It was eminently diggable.”
96 kHz / 24-bit PCM – Warner Classics Studio Masters