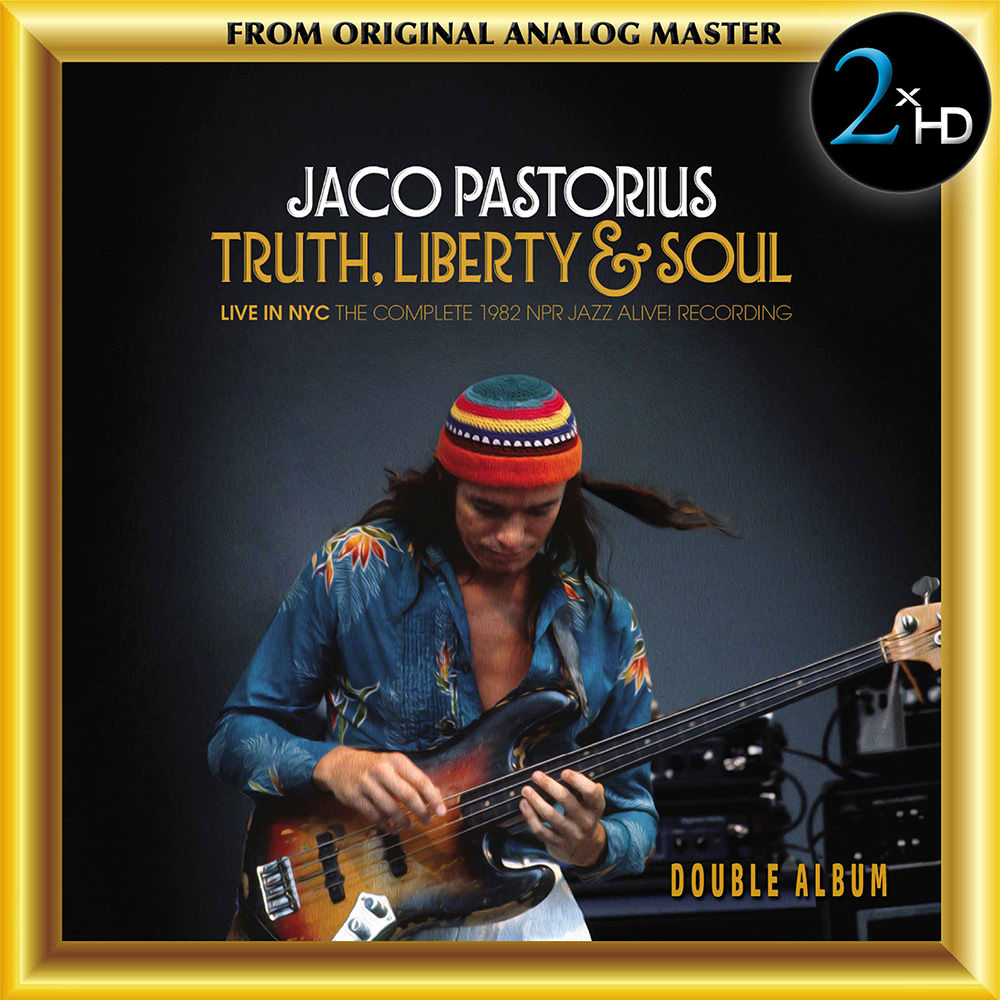 Available in 192 kHz / 24-bit, 96 kHz / 24-bit AIFF, FLAC and 11.2896 MHz, 5.6448 MHz, 2.8224 MHz DSD high resolution audio formats
"... a musical genius at the height of his powers, leading a big band of his equally talented peers through 14 selections as fresh as their recording dates from the period ... it just cannot get any better than this ... I should be grateful we had him and this music." - All About Jazz A first-time release comprising over two hours of extraordinary, groundbreaking high fidelity music, this live album from electric bass genius Jaco Pastorius and the Word of Mouth Big Band, featuring guest harmonica virtuoso Toots Thielemans, was recorded at Avery Fisher Hall in New York City in June 1982 and is presented from beginning to end exactly as it happened. Mastered with 2xHD’s proprietary Fusion Process, it is now available in all high-resolution formats on the 2xHD label. In addition to his extraordinary skill on the bass, Pastorius was also developing into an accomplished and sophisticated composer and arranger and those talents are gloriously on display here.
192 kHz / 24-bit, 96 kHz / 24-bit PCM and 11.2896 MHz, 5.6448 MHz, 2.8224 MHz DSD – 2xHD Studio Masters

In the constant evolution of its proprietary mastering process, 2xHD has progressed to a new phase called 2xHD FUSION, integrating the finest analogue with state-of-the-art digital technology. The mastering chain consists of a selection of high end vacuum tube equipment. For the recordings on this album, the original ¼” 15 ips NAB master tapes were played on a Nagra-T tape recorder, modified with high end tube playback electronics, wired from the playback head directly to a Telefunken EF806 tube, using OCC silver cable. The Nagra T, with its four direct drive motors, two pinch rollers and a tape tension head, has one of the best transports ever made. A custom-built carbon fibre head block and a head damping electronic system permit 2xHD FUSION to obtain a better resolution and 3D imaging. The resulting signal is then transformed into high resolution formats by recording it in DSD11.2 kHz using a Merging Technologies Horus A to D converter. All analogue and digital cables are state of the art. The 2xHD FUSION mastering system is powered by a super capacitor power supply, using a new technology that lowers the digital noise found in the lowest level of the spectrum. A vacuum tube NAGRA HD DAC (DSD) is used as a reference digital playback converter in order to A and B with the original analogue master tape, permitting the fusion of the warmth of analogue with the refinement of digital. 2xHD mastering: René Laflamme 2xHD executive producer: André Perry