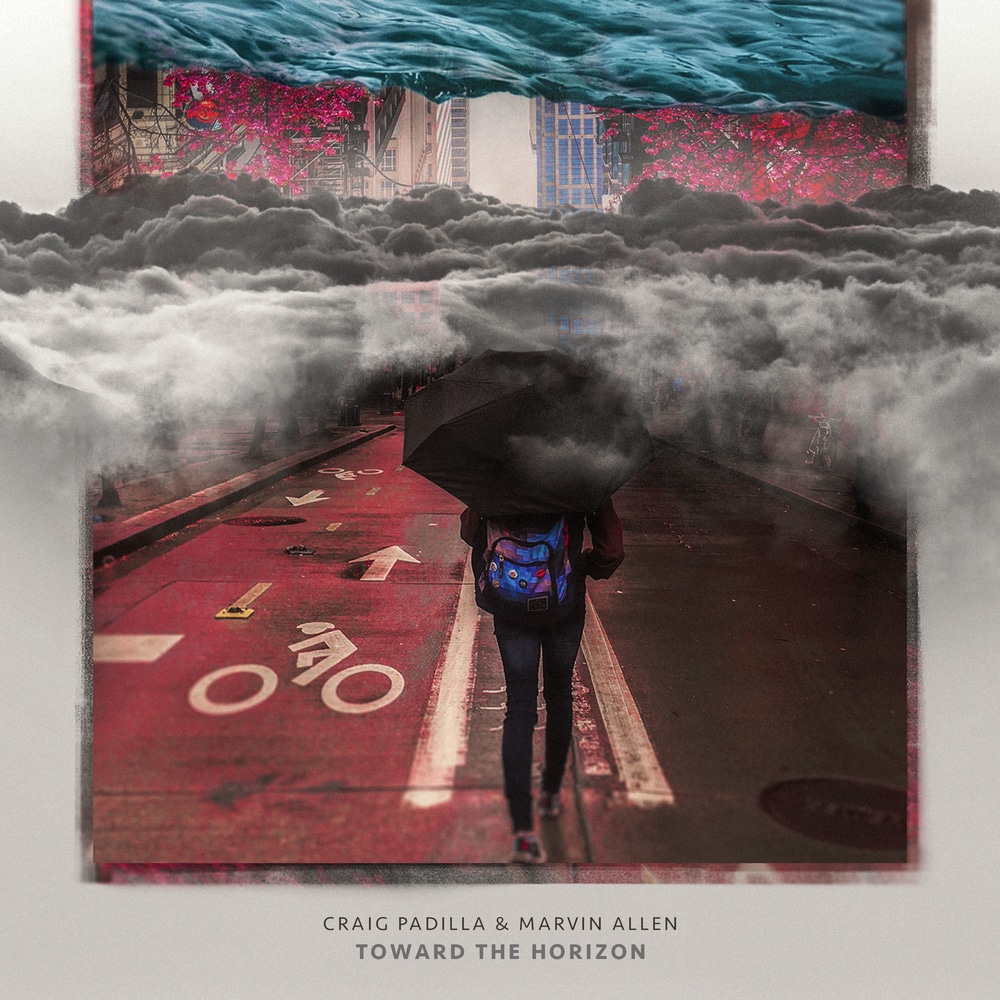 Available in 96 kHz / 24-bit AIFF, FLAC high resolution audio formats
Pulsing with life and vibrant energy, Toward The Horizon is a striking collaboration that combines electronic music veteran Craig Padilla’s analog and digital synth mastery with the electric guitar wizardry of Marvin Allen. Working together for the first time, these two skilled musicians have crafted a masterful free-flowing dreamscape that moves through a myriad of moods, revealing the many colors of an ever-changing sonic skyline. Melodic and rhythmic, surreal and drifting, the resulting music is a timeless adventure through illuminating guitar tonalities and majestic synthesizer vistas. Toward The Horizon is spacemusic in every sense. Hypnotic, captivating, dreamy, and vivid, the music drifts from electronic soundscapes to atmospheric textures, at times swirling and spinning through dazzling sequences and epic soaring refrains. Craig Padilla’s unmistakable deep-space synthworlds blend effortlessly with Marvin Allen’s textural electric guitar, blurring the line between the sound sources to create the quiet moments that make up the album’s ambient foundation. During the more intense moments, Allen’s powerful guitar phrases are a major force, punctuating Padilla’s refined and structured sequences that ricochet through the album’s sonic stratosphere. Toward The Horizon is a recording project that began as a minor musical experiment and quickly blossomed into an alluring album that perfectly synthesizes the talents of two long-time friends who are finally collaborating for the first time. Padilla explains, “I’ve known Marvin since 1990 and I’ve always wanted to make music with him, but we’ve been traveling our own paths since then and never had a proper chance to collaborate until now. We began by riding the waves of inspiration and following our creativity to see where it would lead us.” The two soon discovered their artistic visions were in perfect synergy. “It all started simply enough with Craig and I sitting down to see what might happen if we were to collaborate,” Allen elaborates. “It was clear from this first attempt that our chemistry was special, because eight hours later we had most of the ideas that would eventually become the album’s title track. We have very complimentary skill sets, and so while Craig and I worked hard at what we were creating, it was also very easy and fun to make music together.” With Toward The Horizon, Craig Padilla and Marvin Allen have created an inspiring atmosphere of explosive melodies, classic Berlin school sequencing, electric guitar, and haunting ambient synthscapes that electronic, ambient, and rock music fans will thoroughly appreciate. From the opening guitar strain that shines like a familiar diamond, to the peaceful electronic meditation that marks the album’s exit, Toward The Horizon ebbs and flows with an adventurous energy; always moving, onward and outward through unknown realms, ever forward to the next farthest destination.
96 kHz / 24-bit PCM – Spotted Peccary Studio Masters