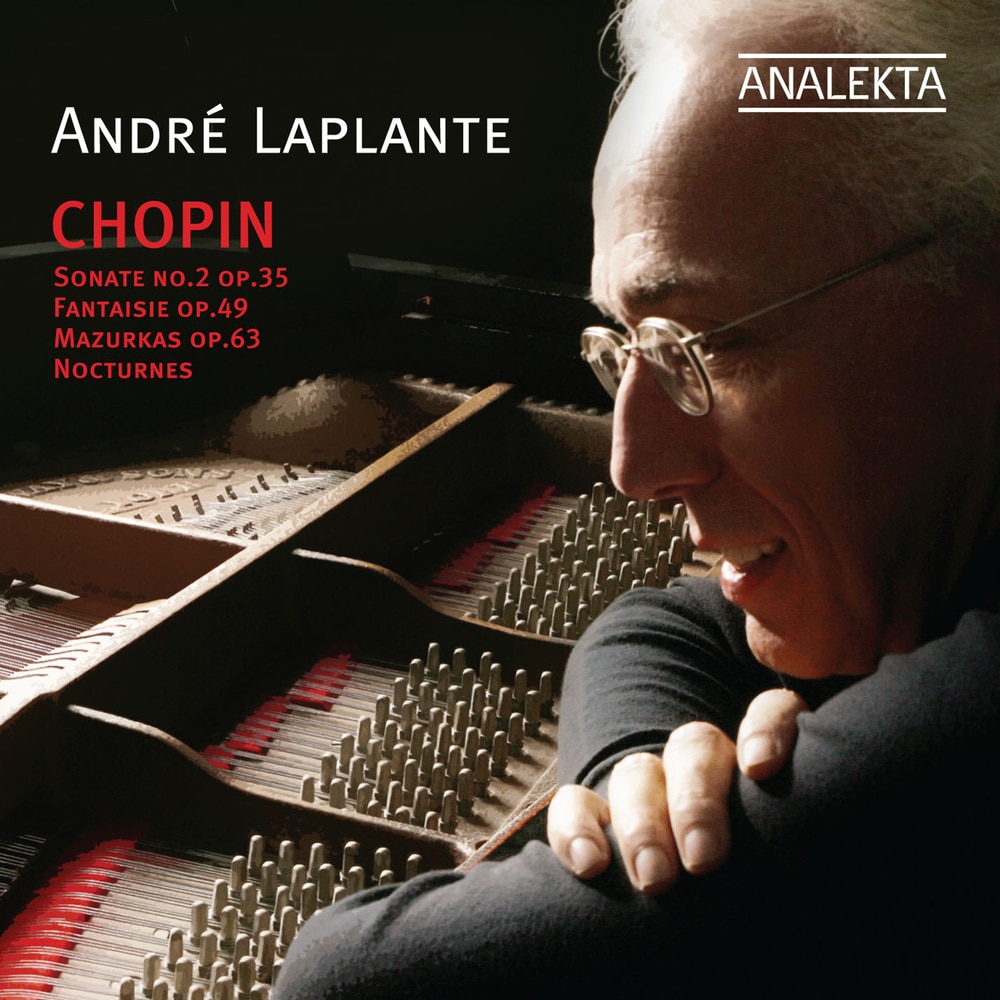 Available in 88.2 kHz / 24-bit AIFF, FLAC high resolution audio formats
A great piano wizard, André Laplante is using all of his artistry in those renewed versions of Chopin’s staples of the romantic repertoire; among them, the Sonata in B Flat minor Op. 35 and the Fantaisie in F minor Op.49. Emotional and passionate—the very essence of the Romantic artist— Chopin had to love to be able to understand, to feel to be able to act. His latent vulnerability constantly pushed him to question and grasp the brevity of life on earth. And transcending this quest, he broadened the frontiers of the musical genres in which he worked. The Fantaisie in F minor Op. 49, composed in 1841, is on several levels an extension of the mood of the Sonata in B-flat minor. In this magnificent and solemn work, Chopin experiments both with keys and moods, which move from the solemn opening motif to the exultation of the agitato passage, with its refined theme that seems like a fragment of an operatic duet, to the almost mystical central episode in B major. The Sonata No. 2 in B Flat minor Op. 35, finished in 1839, disconcerted his contemporaries in several respects. Schumann saw it as a collection of four of Chopin’s “most unruly children,” while Mendelssohn disapproved of the frenzied presto. But when one considers the work at length, its musical ideas unfold with an implacable logic, all four movements cut out of the same expressive cloth. The last is a direct extension of the preceding march, while the raw energy of the heavily chromatic scherzo, on a mazurka rhythm, stems from the fury of the first movement. The anguish, torment and pain are only just erased by a middle section that is almost Bellini-like in its ethereal lightness. The cornerstone of the sonata, the famous “Funeral March” (which was played for the first time in public at Chopin‘s own funeral in 1849) merits being heard again as if for the first time. “Though funereal and gloomy, this lament is nevertheless so heartbreakingly sweet that it almost seems not of this earth,” noted Liszt. “These notes, seemingly muted by distance, instill a supreme reverence, as if they were sung by the angels themselves and were already floating in heaven around the divine throne.”
88.2 kHz / 24-bit PCM – Analekta Studio Masters