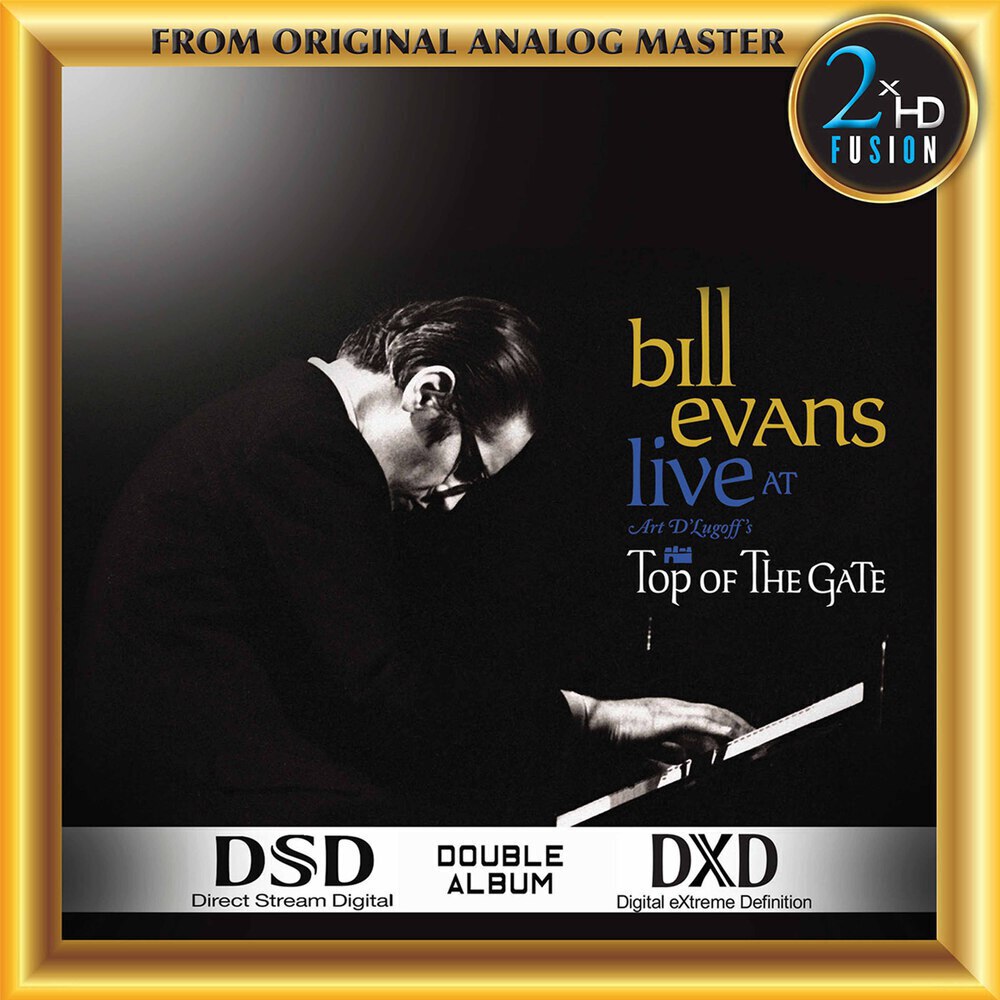 Top of the Gate (Remastered)

Available in 352.8 kHz / 24-bit, 192 kHz / 24-bit, 96 kHz / 24-bit AIFF, FLAC and 11.2896 MHz, 5.6448 MHz, 2.8224 MHz DSD high resolution audio formats
"... the incandescence of the piano playing is astounding ... the most important virtue of the package is the sound ... there is sufficient air and life in this recording to facilitate time travel. Forty-four years collapse and we are there." - JazzTimes.com "Five Stars .... crisp and clear, the sound has weathered the years ... three musicians in their prime ... shows Evans in both swinging and contemplative modes and highlights the trio's superb interaction ... along with the leader, both contribute masterful solos here ..." - All About Jazz “Bill Evans live at Art D’Lugoff’s Top of the Gate […] rivals Evans’s revered Village Vanguard recordings for Riverside in June ’61. The unearthed music is frighteningly vivid – like being seated at a table on stage amid the musicians.” - Wall Street Journal "... the most important live Evans document to emerge in decades and the most rewarding on multiple levels ... it's just prime Bill Evans and the results are nothing short of astonishing for three reasons ... first, the sound is breathtaking ... will make you think you have been seated at a table placed on the stage in the middle of the musicians. I kid you not: the fidelity is that vivid and intimate ... second, the song choices are a dream ... spirited and exciting versions ... third and perhaps most important, Evans' playing is electrifying and loaded with confident and lyrical risk-taking ... a masterpiece ... for those who have spent years yearning for a highly intimate Evans recording that brings the artist as close as possible to the ear and provides marvellous material and execution, your ship has finally come in." - JazzWax.com Top of the Gate captures two complete sets of the Bill Evans trio with bassist Eddie Gomez and drummer Marty Morell on October 23, 1968 at Art D’Lugoff’s legendary Village Gate club in New York City. Originally recorded by Resonance founder and co-president George Klabin at 21 years old, the collection has been digitally remastered from the original tapes. "Being able to hear jazz up close, as I did in clubs, I was dismayed by what I heard on live recordings. The sound was so often muddy and distant and not satisfying. I wanted to capture the intimacy ... one of the best experiences of my life. This was one of the best Bill Evans trios playing during a period, on a night, where Bill Evans was at his best." - George Klabin, recording engineer
352.8 kHz / 24-bit, 192 kHz / 24-bit, 96 kHz / 24-bit PCM and 11.2896 MHz, 5.6448 MHz, 2.8224 MHz DSD – 2xHD Studio Masters