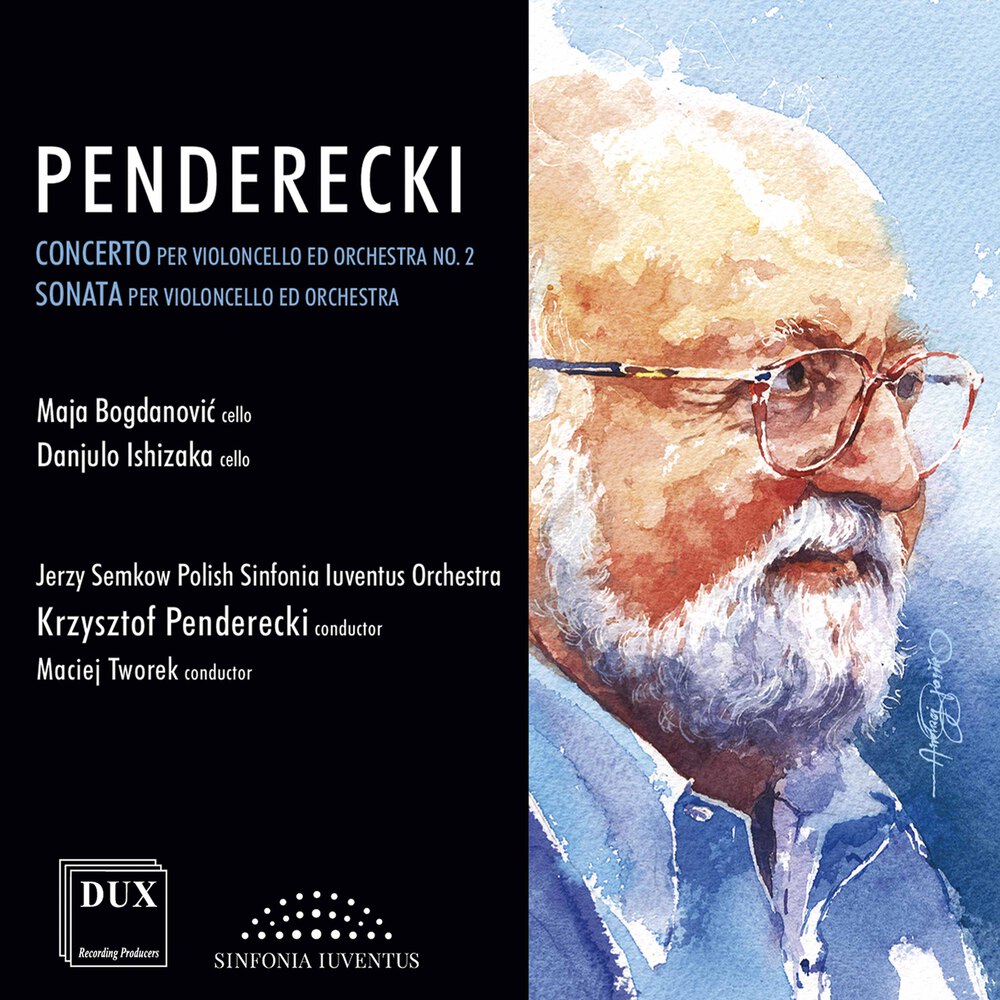 Available in 96 kHz / 24-bit AIFF, FLAC high resolution audio formats
The Jerzy Semkow Polish Sinfonia Iuventus Orchestra has worked closely with Krzysztof Penderecki since its inception. He became its Honorary Patron in 2013 and has always remained a friend and mentor to the ensemble. In these sad circumstances, after the death of the Maestro, we present his newest albums to demonstrate that his music will remain with us and it will always bring joy to its listeners! The new album released by DUX continues (and closes) a series of recordings of Penderecki’s concertos for solo instruments (after the completion of the symphonic recordings). The album includes the 1982 Second Cello Concerto, dedicated to the brilliant Russian virtuoso Mstislav Rostropovich and the original Sonata for Cello and Orchestra. The record dating back to 1964, chronologically more than two decades earlier, premiered by Siegfried Palm, shows off the composer’s style so typical for that era – avant-garde, boldly searching for new sounds, structures and textures. The concert, in turn, was created at a time when the former modernist tried to reconcile with tradition, creating a style that critics described as the “New Romantic”. In this work, however, apart from the “romanticising” sounds, his interest in sonoristic techniques developed in earlier years also returns. Basically, the one-movement composition is divided into eight sections, forming a very coherent and formally original whole. The recording of the concert features an excellent Serbian soloist and chamber musician Maja Bogdanović, particularly valued as a 20th-century music performer and recipient of many new dedicated works, who has worked with Krzysztof Penderecki on numerous occasions. The interpreter of the Sonata is Danjulo Ishizaka, winner of many prestigious awards, who has German-Japanese roots and whose mentor – highly appreciative of his talent and skills – was Mstislav Rostropovich himself. The works were recorded in the Witold Lutosławski Polish Radio Concert Studio with the participation of the composer and his close collaborator Maciej Tworek as conductor. Unfortunately, this was the last time when the Jerzy Semkow Polish Sinfonia Iuventus Orchestra in Warsaw was to collaborate with Krzysztof Penderecki, and it closed an impressive series of phonographic recordings of the set of symphonies and concertos of the Maestro who died on 29 March 2020.
96 kHz / 24-bit PCM – DUX Studio Masters