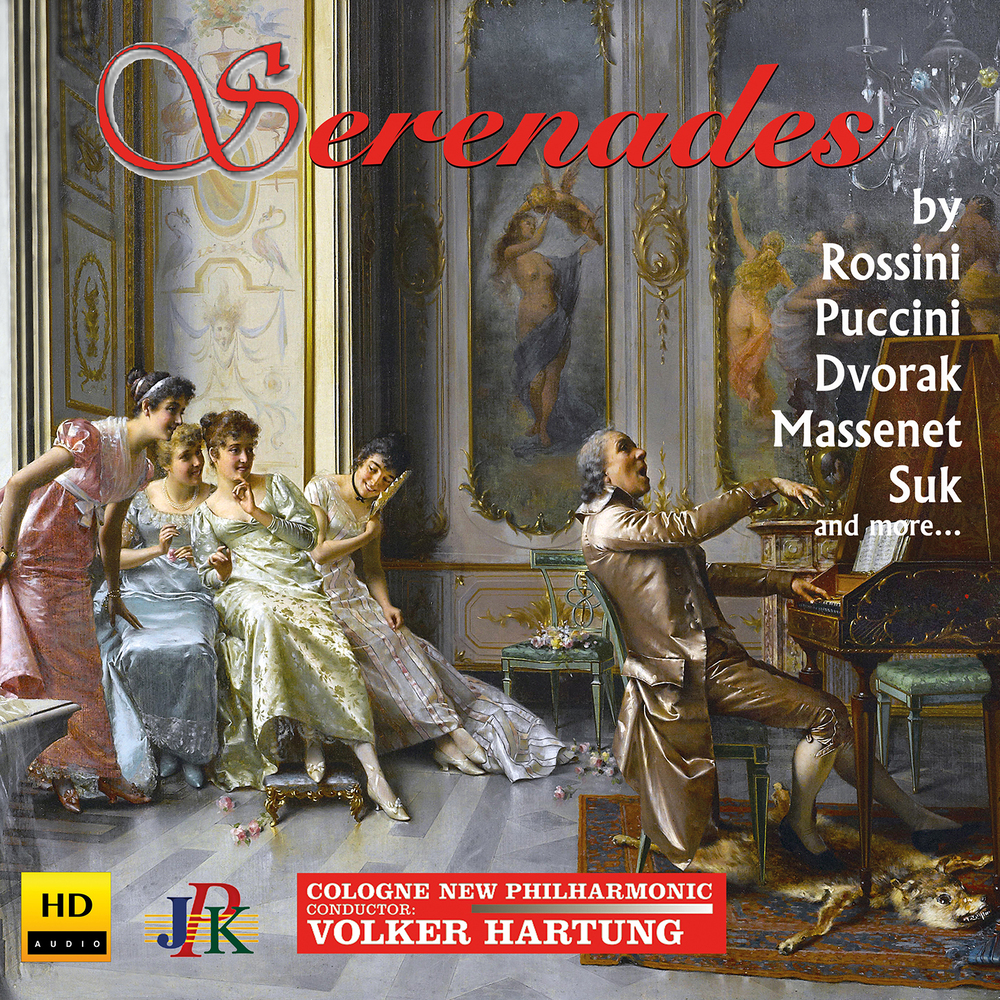 Available in 48 kHz / 24-bit AIFF, FLAC audio formats
On this album, Volker Hartung conducts his Cologne New Philharmonic Orchestra and its soloists in beautiful highlights of 19th Century Serenade music. Josef Suk (1874 - 1935) was a Czech composer, Antonín Dvořák's son-in-law, and a well-known violinist. He began his oeuvre with chamber music and, in wonderful sounding Dvořák tradition, with a four-movement string serenade op. 6, Several sources report that the avowed railway enthusiast Dvořák had encouraged his then-future son-in-law Suk to write down locomotive numbers at train stations. Dvořák Suk is also said to have passed tests on his knowledge of locomotive engineering to get Dvorak's approval to marry his daughter! Jules Massenet gained notoriety through the violin solo "Meditation, "which is part of the oriental influenced opera "Thaïs. " This solo is considered a famous encore in concerts and is often part of classical editions on specific topics. Alexander Borodin composed his Second Quartet in D Major in 1881 and dedicated it to his wife. The quartet was supposed to be a 20th-anniversary gift with a program evoking the couple's first meeting in Heidelberg. The third movement, called "Nocturne," became popular. Rossini wrote his Serenades when he was only 12 years old. On this album, the Serbian flute virtuoso Dejan Gavric plays one of these happy pieces together with the fabulous string players of the Cologne New Philharmonic. Offenbach composed "Les Larmes de Jacqueline" in 1846 as the second in a set of three pieces under the title "Les Harmonies des Bois" (Op.76). During this time, Offenbach was traveling throughout Europe, performing as a cello virtuoso. Often performing his music, «Les Larmes de Jacqueline» was most likely composed for himself and his daughter Jacqueline. Jadranka Gasparovic performs this lovely piece in this recording. Dvorák's Carnival Overture served as a musical farewell to his beloved Prague and, at the same time, as a greeting for the composer from New York, where he took on the job of director of the National Conservatory of Music. The carnival overture is about a lonely, sensitive visitor who comes to a city at nightfall where the carnival is in full swing. Everywhere you can hear the sound of instruments and singing. One can feel the joyful mood increasing to unrestrained cheerfulness.
48 kHz / 24-bit PCM – JPK Musik Studio Masters