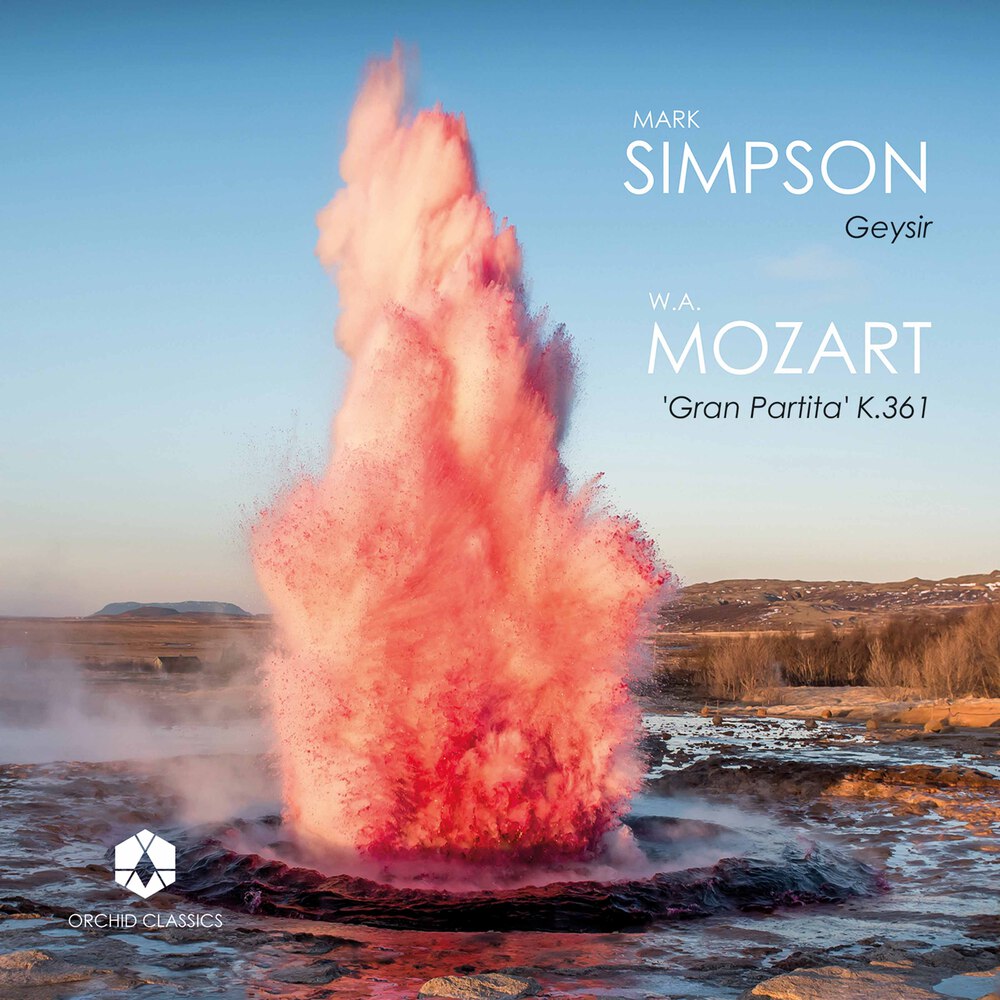 Available in 96 kHz / 24-bit AIFF, FLAC high resolution audio formats
Geysir was a commission for the Britten Sinfonia. It was imagined as a partner to Mozart’s Serenade in B flat (K.361), the ‘Gran Partita’, drawing on the same instrumental forces: pairs of oboes, clarinets, basset horns, bassoons, four horns, and double bass. Geysir’s relationship to Mozart goes beyond programming convenience. Geysir – the Icelandic word for geyser, from the Old Norse geysa, ‘to gush’ – is the surface emanation of two ideas in the Serenade. The first is the resplendent B flat major chord that opens the ‘Gran Partita’: fulsome homophonic textures, making extravagant and atmospheric use of warm clarinets, basset horns, bassoons, and french horns, are key to the design of Simpson’s piece – though Geysir extends the spread and range of these chords to generate a sound world very much its own. The second compositional seed comes from an especially numinous moment in Mozart: variation five of the Serenade’s sixth movement. A quartet of clarinets plays various iterations of a spread B flat major chord, pianissimo, with horns underneath; above this an oboe sings a plaintive and lightly-ornamented melody. These murmuring, overlapping figures are where Simpson finds the ‘bubbling’ clarinets at the outset of Geysir, and they shape its further melodic impulses. Texture itself is an idée fixe in Geysir, summoning a musical landscape that is organic, intuitive, even atavistic. Composer and clarinettist Mark Simpson (b.1988, Liverpool) became the first ever winner of both the BBC Young Musician of the Year and BBC Proms/Guardian Young Composer of the Year competitions in 2006. He went on to read Music at St. Catherine’s College, Oxford, and studied composition with Julian Anderson at the Guildhall School of Music & Drama, before being selected for representation by the Young Classical Artists Trust. Simpson was a BBC New Generation Artist from 2012-2014. He received a Borletti-Buitoni Trust Fellowship in 2014 and the Royal Philharmonic Society Composition Award in 2010, and was a Visiting Fellow of Lady Margaret Hall, Oxford. In 2015 he was appointed Composer in Association of the BBC Philharmonic for a period of four years.
96 kHz / 24-bit PCM – Orchid Classics Studio Masters