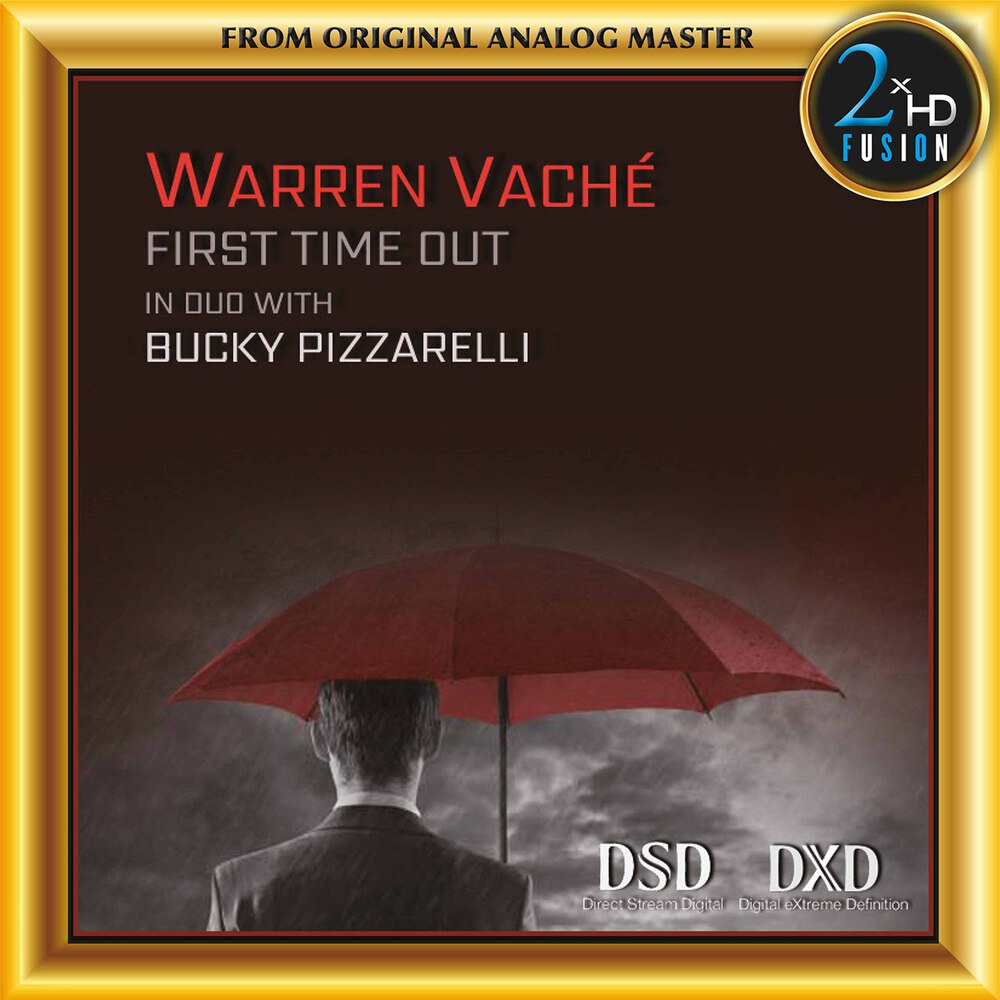 Available in 352.8 kHz / 24-bit, 192 kHz / 24-bit, 96 kHz / 24-bit AIFF, FLAC and 11.2896 MHz, 5.6448 MHz, 2.8224 MHz DSD high resolution audio formats
2xHD uses it's trademark high-fidelity mastering process to present the classical legacy album First time Out, a duo album from Warren Vaché featuring guitarist Bucky Pizzarelli. The 2xHD Fusion Mastering System is an innovation in audio restoration for a virtual audio reality: In the constant evolution of its proprietary mastering process, 2xHD has progressed to a new phase called 2xHD FUSION, integrating the finest analog, with state-of-the-art digital technology (back to the future technology). The mastering chain consists of a selection of high-end vacuum tube equipment; The original ¼" 15 ips NagraMaster curve, NAB or CCIR master tapes are played on a Nagra-T tape recorder which was modified with high-end tube playback electronics, and wired with OCC silver cable from the playback head direct to a Nick Doshi tube head preamplifier - the Nagra T, which - with its four direct drive motors, two pinch rollers and a tape tension head, has one of the best transports ever made. A custom-built carbon fiber head block and a head damping electronic system permit 2xHD FUSION to obtain a better resolution and 3D imaging. If the original master is in 96kHz/24 bit or 192kHz/24bit a High-end vacuum tube NAGRA HD DAC X is used to playback the digital master to be able to do the mastering in the analog domain. The resulting signal is then transferred to high resolution formats by recording it in DXD using a custom 2xHD Technologies A to D converter. All analog and digital cables used are state of the art Siltech. The 2xHD FUSION mastering system is powered by a super capacitor power supply, using a new technology that lowers the digital noise that originates in the lowest level of the spectrum. A vacuum tube NAGRA HD DAC X is used as a reference digital playback converter in order to A and B with the original analog master tape, permitting the fusion of the warmth of analog with the refinement of digital.
352.8 kHz / 24-bit, 192 kHz / 24-bit, 96 kHz / 24-bit PCM and 11.2896 MHz, 5.6448 MHz, 2.8224 MHz DSD – 2xHD Studio Masters