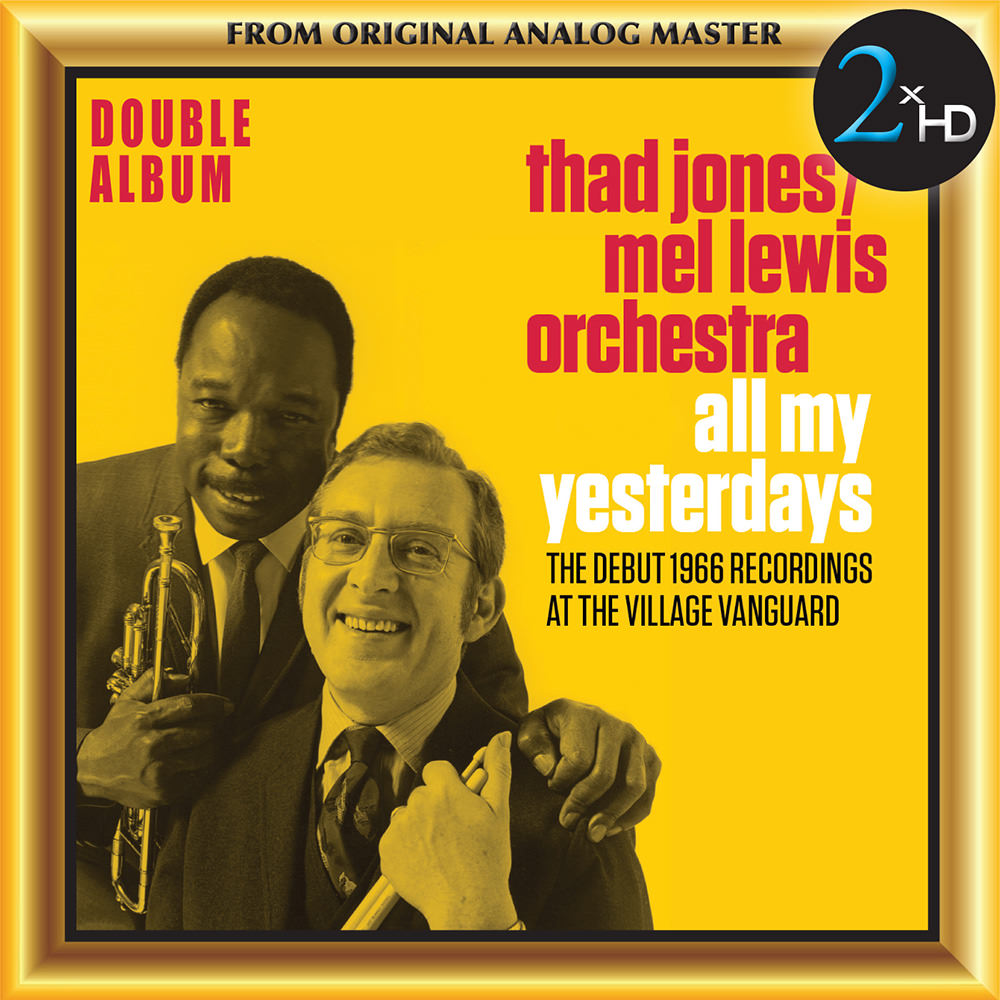 All My Yesterdays - The Debut 1966 Recordings at the Village Vanguard

Available in 192 kHz / 24-bit, 96 kHz / 24-bit AIFF, FLAC and 5.6448 MHz, 2.8224 MHz DSD high resolution audio formats
"... if you're a fan of the TJ/ML Orchestra, you'll flip over the new set. (The sound restoration) is exceptional and makes the recording sound as if these guys are in the room with you." - JazzWax.com "... the acoustics are superb and a testament to the 'on the fly' engineering skills of George Klabin ... both discs sound superb with the dynamic power of the orchestra on full display ... this is stunning music with visceral power, an historical testament to the best of big band jazz ... if you are a connoisseur of big band jazz, this is a must-have purchase ..." - Audiophile Audition "Five Stars ... the apotheosis of live jazz performance ... before even considering the music, there is the captured ambiance ... a very intimate listening experience that only lacks the smell of just-lit Lucky Strikes and Cutty Sark on the rocks ... the sound and atmosphere is electrically charged and immediate. The sound is spacious enough to get up and walk around in, passing through all of the sections ... a compounded product of rare substance and beauty. It is immediately evident that there is something special taking place ... this is, simply, what live music is all about: invention, spontaneity, improvisation and spring freshness. Hear from where all big band since has come." - All About Jazz This double album marks the first official release of recordings capturing the Thad Jones/Mel Lewis Orchestra in concert at the legendary Village Vanguard in New York City in early 1966. The treasure trove of previously unheard live performances from two shows six weeks apart is presented in ahead-of-its-time audiophile quality. George Klabin, a 19-year-old engineer, taped the orchestra direct to two-track, mixing each of the soloists live on the fly. For this package, Klabin transferred and remastered the audio using the original tapes. "Put on a pair of good stereo headphones and immerse yourself in the atmosphere of those two nights. You will hear all the subtleties: Thad's shouts, the room sound, the musicians' camaraderie, encouraging each other and most of all the pure joy! Now you can be there, too." - George Klabin, executive producer/original engineer
192 kHz / 24-bit, 96 kHz / 24-bit PCM and 5.6448 MHz, 2.8224 MHz DSD – 2xHD Studio Masters

This album contains high-resolution digital transfers of material originating from an analogue master source. For the 2xHD transfer of this recording, the original 1/4”, 15 ips NAB master tape was played on a Nagra-T modified with high end tube playback electronics, wired with OCC silver cable from the playback head direct to a Telefunken EF806 tube. The Nagra T has one of the best transports ever made, having four direct drive motors, two pinch rollers and a tape tension head. Each format (96kHz, 192kHz, DSD 2.8 MHz and DSD 5.6 MHz) was created using Merging Horus/Hapi A/D converter, calibrated to the required format, and a dCS Vivaldi clock. 2xHD mastering by: René Laflamme and André Perry 2xHD executive producer: André Perry